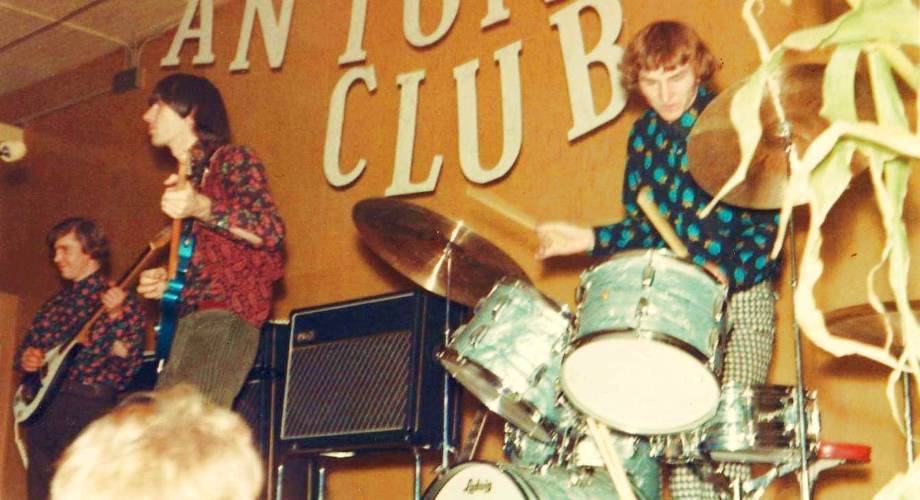 A lot of big changes were beginning to unfold in Vancouver in 1966 as it transitioned into the psychedelic scene. A young entrepreneur named Jerry Kruz began booking concerts under the moniker of 'The Afterthought' and seemed to have the insight and vision ahead of others as to what was happening. He had seen the San Francisco scene and brought The Grateful Dead and Country Joe & The Fish to Vancouver in their infancy, and it wasn't long before things really started to take off. The Centaurs were a big part of the scene and they were already ahead of their time with both their music and their style.

On February 11, The Centaurs played the Teen Town A-Go-Go Dance at the Peach Bowl in the Okanagan (interior of B.C.). Although it was a regular annual event, this one in particular was one of the largest attended dances, drawing a record crowd of over 1,400 people.

During their performance, Louis Pitre suddenly collapsed on stage and was rushed to the hospital where it was determined that he had a heart condition. He was ordered to stay away from any excitement which resulted in his sudden departure from the band. He was replaced by Bob Brown, a neighbor and friend of theirs who was attending University at the time but left to join the band.

On March 11, they played at the very first Afterthought concert held by Jerry Kruz at the Scottish Auditorium, and again on May 20th at the Pender Auditorium.

That summer, they went to Robin Spurgin's recording studio on Broadway, the top studio in town, where they cut a bunch of songs as a sample of their best performances in order to make a demo record to send ahead to their agency in Germany. A few dozen demo discs were sent off immediately to be distributed to clubs for potential bookings.

On August 14, they appeared on a Channel 8 TV special filmed at The Cave supper club along with other bands, and on the 18th they opened for The Beach Boys with Chad and Jeremy at the Queen Elizabeth Theatre. On Sept 23, they played to a full house at the Killarney Community Centre, and on October 1st they played to a sold out crowd at the University of British Columbia's War Memorial Stadium along with The Shockers and Jayson Hoover and the Epics. Their final Vancouver performance was on October 14th at The Afterthought at the Kits Theatre, where they shared the stage with The Blacksnake Blues Band.

In preparation for their trip, they had bought a brand new Ford Econoline extended Van, and even got a roadie - Don Moss, a friend of theirs who drove the van and loaded the gear.

A few days later, the band left on their trek across Canada to Montreal, where they would board the ship to Holland and from there over to Germany. Along the way, they stopped in Saskatchewan to play at The Esquire Club on October 21, sharing the stage with a Toronto group called The Knack. This would be The Centaurs' last performance on Canadian soil.

On November 19, their van and all their gear were loaded aboard the RMS Carmania steamship for the voyage across the Atlantic, where an unknown and exciting world awaited them. They had brought along a lot of high end gear and didn't want it left down in the hold, so they stacked it in a bunk in one of the two cabins they shared. During the voyage, the Captain heard there was a band on board and asked them if they would play - so they did, every night. Ironically, some of their Vancouver fans just happened to be on board. The ship's bar closed early each night but they discovered they could fill up the tables with as much beer as they could prior to last call, in order to last them through the night. 8 days later, the ship docked in Rotterdam, Holland. Suddenly a problem arose that they hadn't anticipated. The Dutch authorities seized their van in lieu of a cash bond, to guarantee they would leave the country following their tour. Hugh had to wire his parents to surrender his savings bonds ($1800) in order to get the van back.

Their hotel was located on the main strip in Rotterdam, and that night John was nervous and couldn't sleep because of all the excitement and the time change. So he went for a walk by himself, which really wasn't the smartest thing to do in a foreign port city in the middle of the night. He walked down the street and heard music coming from a club, so he went in. He found the club manager, Hans Van Oosterhaut and told him all about The Centaurs. Hans was excited that they had come all the way from Canada, and wanted to hear them play. The next day he invited them to perform for the Jack Sempf booking agency at the casino in Scheveningen, a suburb of The Hague and a popular beach resort area on the western coast. The casino was a hot spot for rock bands, and hosted many top British bands like The Rolling Stones, Kinks, Animals, Small Faces, etc. It was also home base for The Golden Earrings, one of Holland's top bands. Jack was immediately impressed with them, and signed them. Their very first booking was at the casino opening for The Troggs! This really put them on the map and set them up for a successful tour of Holland. Germany, their original destination, would have to wait as Holland had got to them first. Ironically they would discover that Holland was much more of a happening place at that time anyways. They soon became regulars at one of the hottest venues, The T-Smurf Club in Amsterdam - Pink Floyd had just played there a week earlier. The band's popularity soared - they were often billed as "The Beatles of Canada" or "Canada's top group". They were featured in prominent magazines and newspapers and had a rapidly growing fan club. Polydor got wind of the band and offered them a recording contract, releasing a single with a picture sleeve for the songs, "Kicks" and "Be Happy".

In November 1967, they were invited to perform at one of the very first Dutch pop festivals in Utrecht, called "Flight to Lowlands Paradise", which was small at the time but would grow the following year to over 18,000 people in attendance.

Then suddenly, they were informed by the Dutch government that their work visas were expired and they would have to leave the country. The Dutch media went on the defense asking people to write and appeal to the Dutch princess to intervene on behalf of the group in order to help them stay in Holland. It didn't work, and the band left to go to Germany, but with a special allowance to return to Holland for recording purposes only. Things were a lot different in Germany. Their first gig was at the now-famous Star Club in Hamburg where the Beatles had got their start several years earlier. The club had been struggling to stay afloat ever since, as there wasn't much of a scene there anymore. They were shocked when the club asked them if they would stay there and play for free, promising to help them become as big as The Beatles. John's cocky reply was, "No thanks, we're already famous!" Besides they were already obligated for a number of upcoming concerts over the next month.